The Brook is a lovely community arts venue, bar and restaurant, owned by Andy and Thea Brook. As a family we started visiting The Brook about two and a half years ago. Since then Keira has had a birthday party there, I’ve hidden free art there several times, and we’ve enjoyed food, drink and music more times than I can remember.

On June 1st 2017 – having dithered over the idea of performing live there for several weeks, I delivered my first faltering open mic night performance at The Brook. I survived week one, and came back again, and again, and again, having resolved to persist, and over time, to experiment with an ever expanding body of songs.

Since that first performance in June, there have been 32 open mic nights, and I’ve only missed four of them. Despite being a nervous performer, I’ve persisted with this project largely because of the welcoming atmosphere, nurtured by everyone in the room, and led chiefly by Dan Smith. Dan takes care of sound and set up – and is a master cajon player, regularly providing the beats for numerous acts. The crowd offers encouragement, any criticism is left to the performer. As the weeks progressed I noticed I became more accepting  of this encouragement and began to use it as building blocks for more adventurous work.

Life has been pretty up and down (in some ways much more down than up) over the past year or so, and open mic night has served me well as a safe and encouraging place, sometimes just to relax, other times to go nuts. I’ve enjoyed the experience enormously, and while I felt sad when hearing the news of the closure – I quickly decided to make the most of the time left, rather than mourn the passing of something I’ve grown to love.

On December 28th 2017, I and many others, played there for one last time. After serving the local community for five years, The Brook in Wallington closes its doors tonight (Dec 31st) – before reopening in Hackney in January 2018.

This has been an excellent adventure. I’ve grown to enjoy performing, I’ve made some good friends and listened to lots of amazing live music, thanks everyone. This chapter now closes, and we are looking forward to what promises to be one hell of a New Year’s Eve party.

Photo above by Peter Ball

Footnote: Songs I can Remember Playing.

* indicates a song played on multiple separate occasions over the seven month period.

I spent last night at The Wallington Arms, along with most of the rest of the town if the crowds were anything to go by. It was the annual community awards night – a chance to meet folk, catch up with friends, hear some live music and celebrate some of the good work being done in the community.

I hid this piece of free art in the Christmas tree in the pub last night. It was found and is off to a new home. It’s a sketch I painted in 2012, one of my favourite early pieces. Parting with this work was a great reminder for me that I started the free art project to help me learn to let go. 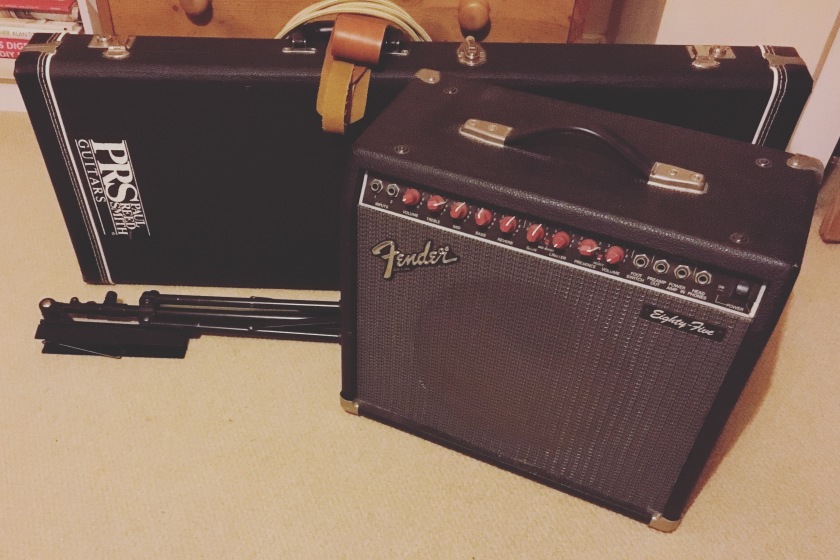 I was fortunate to be part of the live music set up last night. Most people in the area who know me, do so through my free art. Last night gave me the opportunity to say hello in a different guise. I’m very nervous when it comes to musical performances and the crowd were really supportive. I played one of my favourites, City Of New Orleans, and Fairytale Of New York. Loads of people sang long with the second song, that was lovely to hear, thank you. Amelia played, and so did Chloe Ray and her band – great fun!

The free art project was nominated in two award categories, and I came home with two runner up prizes. It is lovely to be recognised by your peers, particularly when it’s for doing something you love. Thank you very much to everyone who nominated and voted for me, I appreciate it very much. It was great to see fellow artist Jason Goldrick receive a nomination too, and well done to all the nominees and winners for your contribution, and the recognition you received. And finally, thank you to Carole and Keira who encourage me and give me the time and space to allow the free art project to breathe, and to develop. I couldn’t do it without you. xx.

It’s the Wallington Music Festival this weekend, and my home town will be showing off its abundance of musical talent. Check out the festival Facebook page for details of all the acts, and when and where they are playing.

This week’s free art drop is a design to celebrate the festival. I’ve taken some of the colours from the festival design and applied them to my art. I’ve chosen colours which represent the local river, and lavender, and I have applied them in a way that creates a unique ‘fingerprint’ surface on the paint.

If you are off to the festival this weekend, have an amazing time and keep an eye out for this free art drop which will be hidden somewhere around town.

A portfolio of my Artist In Residence work

Buy Stop Doing Dumb Things Here – 48 ideas and suggestions to unblock your thinking and help you be more creative in your work.

The Art of Leadership – Find out more about how I can help you here.

Latest from the blog

Looking for something in particular? Try here.